-More than 60 years in the ministry
-Is the only staff person of SCLC to be ordained by Dr. Martin Luther King Jr. 1966
-Selected by Winston-Derrick Publishing Company as one of the Biblical Scholars and Theological Consultants for the Original African Heritage Bible
-NAACP Religious Affairs Chairman for the State of Illinois under the leadership of Attorney Don Jackson, President of the Illinois Chapter
-Chaplain of the National Black United Front under the leadership of Dr. Conrad Worrell
-Chaplain of the National Association of Real Estate Brokers under the leadership of Ron Branch, President
-Former Chaplain World Conference of Mayors founded by Mayor Johnny Ford of Tuskegee, Alabama
-After the Million Man March selected by Minister Louis Farrakhan as the only Christian minister in a 30 member delegation traveling to 18 African countries “Atonement Reconciliation Responsibility Peace Tour”

My people are destroyed for lack of knowledge: because thou hast rejected knowledge, I will also reject thee, that thou shalt be no priest to me: seeing thou hast forgotten the law of thy God, I will also forget thy children.

A Picture is Worth a Thousand Words 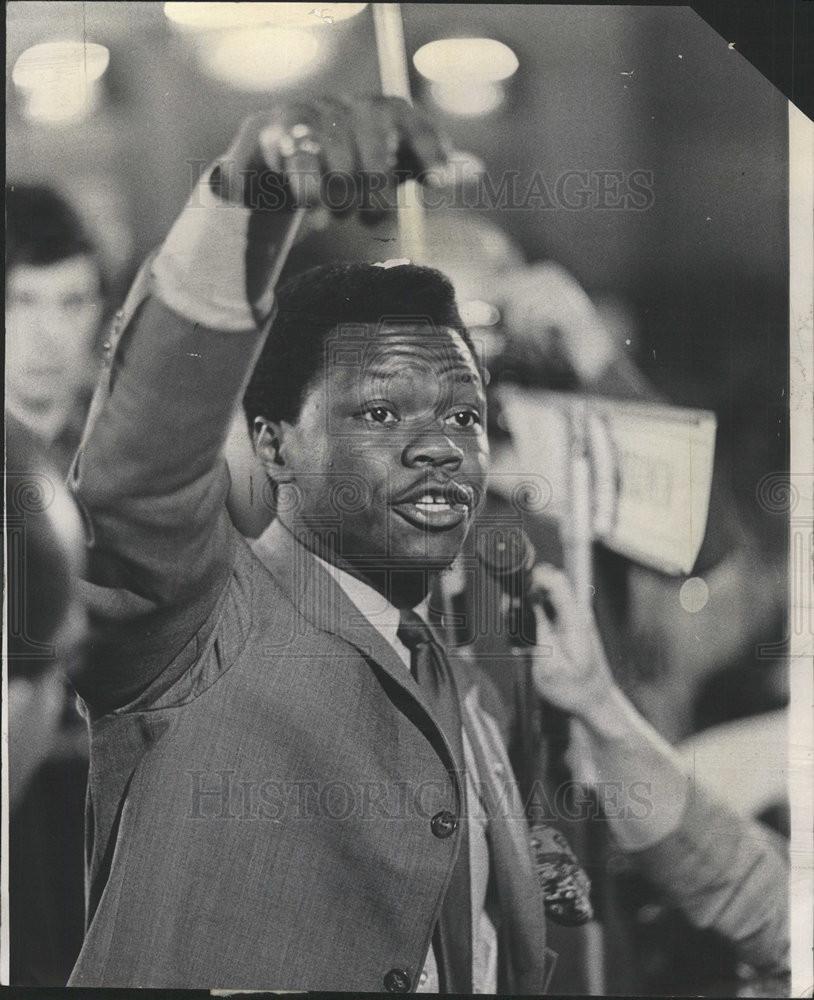 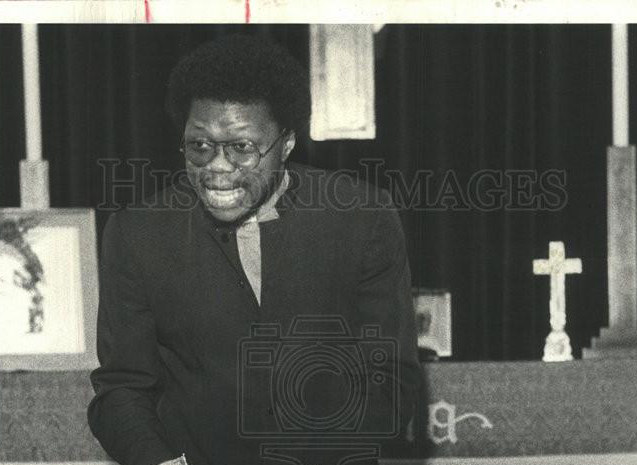 Rev. Sampson with others members of the civil rights movement 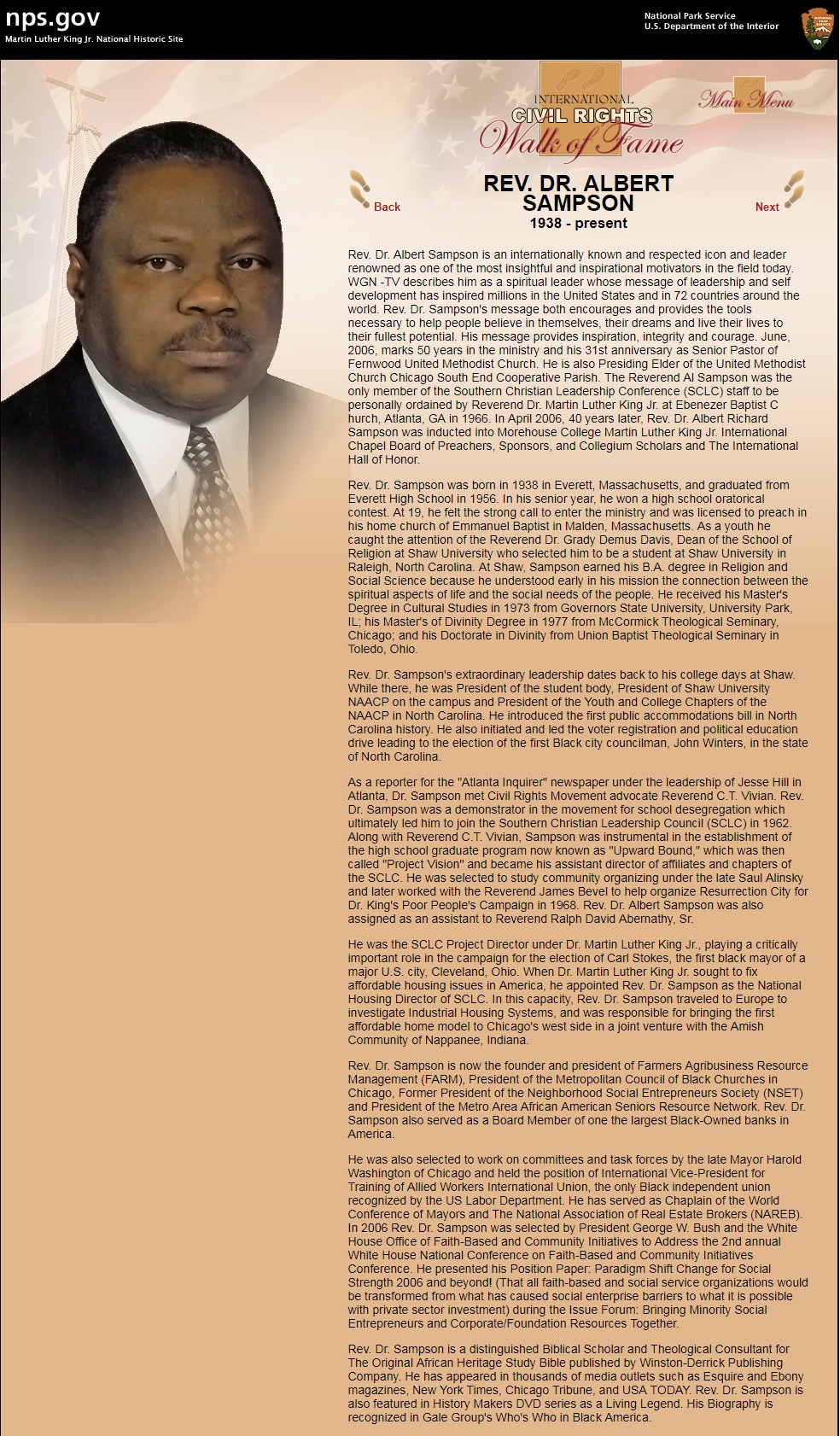 Rev Albert Sampson was a contributer. This copy was custom monogrammed.

Years in the Civil Rights Movement

Years as a Reverend

The Reverend Dr. Albert Sampson was the only member of the Southern Christian Leadership Conference (SCLC) staff to be personally ordained by Reverend Dr. Martin Luther King Jr. at Ebenezer Baptist Church, Atlanta, GA in 1966. In April 2006, 40 years later, Rev. Dr. Albert Richard Sampson was inducted into Morehouse College Martin Luther King Jr. International Chapel Board of Preachers, Sponsors, and Collegium Scholars and The International Hall of Honor. Rev. Dr. Albert Sampson is an internationally known and respected icon and leader renowned as one of the most insightful and inspirational motivators in the field today. WGN -TV describes him as a spiritual leader whose message of leadership and self development has inspired millions in the United States and in 72 countries around the world. Rev. Dr. Sampson is a distinguished Biblical Scholar and Theological Consultant for The Original African Heritage Study Bible published by Winston-Derrick Publishing Company. He has appeared in thousands of media outlets such as Esquire and Ebony magazines, New York Times, Chicago Tribune, and USA TODAY. Rev. Dr. Sampson is also featured in History Makers DVD series as a Living Legend. His Biography is recognized in Gale Group's Who's Who in Black America.


Complete the form at the bottom of this page to inquiry about a speaking engagement by clicking here.

The Spirit of the Lord GOD is on me, because the LORD has anointed me to bring good news to the poor. He has sent me to heal the brokenhearted, to proclaim liberty to the captives and freedom to the prisoners;

The soldiers made a plan to kill all the prisoners, in order to keep them from swimming ashore and escaping. But the army officer wanted to save Paul, so he stopped them from doing this. Instead, he ordered everyone who could swim to jump overboard first and swim ashore; the rest were to follow, holding on to the planks or to some broken pieces of the ship. And this was how we all got safely ashore.

When it's my time to go to be with the Lord, I want the following written on my tombstone "Making it in on broken pieces!"

Are You Ready To Join The New Movement?

Fight for Your Rights. Contact us to Learn More.

The Next Generation of Leadership

The next generation of African American church and civil rights leaders will be called by God and will be dedicated to scripture to lead all people and the world into the future. The next generation needs to know not just the bible, but they need to understand technology, economics and ownership to truly empower those who have none. Mr. Michael Thompson is one of few African descended believers in the Messiah training under Rev. Dr. Albert Sampson who brings a wealth of knowledge, experience and integrity. Mr. Thompson is the logical choice to continue the fight to bring God's word to the masses through technology and to attract the younger generations. The church as a whole is very weak when it comes to technology and teaching what we need to take us into the future. Many of us are consumers of technology, but few of us are creators of technology and this is where we need to be. And to make matters worse, we are the only people who don't own anything or grow anything. The masses will be and are controlled through technology, food and economics. We have very little if any influence in any of these areas.